Is he really proud of wanting to keep Crack Houses open?

Yet another appalling performance from Ming as his party's duplicity humiliated him once more. So good we just thought we'd reprint it in full:

Sir Menzies Campbell (North-East Fife) (LD): Can the Prime Minister recall a time when there was as much acrimony as there is now between the Home Office on the one hand, and the police and judiciary on the other? How is that to be resolved?

The Prime Minister: It is to be resolved, I hope, by meeting the public’s genuine concerns about the shortcomings of the criminal justice system. The right hon. and learned Gentleman asks a general question about the Home Office and judges, but if the public knew the Liberal Democrats’ voting record in this House on law and order policies, they would not give him or his colleagues the time of day on the issue.

Sir Menzies Campbell: I am happy to defend my voting record, and the Prime Minister should defend his, given what he said when he was in opposition. As a result of the events of the past few weeks, is not it clear that we need wholesale reform of the Home Office, including the creation of a separate ministry of justice?

The Prime Minister: No, I do not agree with that at all. The right hon. and learned Gentleman says that he and his colleagues are proud of their voting record, but I should like to see the leaflets that the Liberal Democrats put around during the recent local elections saying how proud they were that they voted against the antisocial behaviour legislation. I want to see the leaflets saying how they also voted against the powers to close crack houses and against the drunk and disorderly provisions. If the right hon. and learned Gentleman shows me those leaflets, I will pay some attention to what he says.

Since there are a number of stories saying how much our Prime Minister is in trouble he must love it when Ming gives him an opprtunity to shine. After a couple of "good" weeks Mings nerves must be at frayable proportions as he now realises the backbenches on all sides were laying off to spring an unexpected ambush. When they strike again as his party's fibs are exposed will worry him awfully. We almost feel for the guy.

But just as a reminder perhaps we should remind folks of the policies Ming is so proud of: 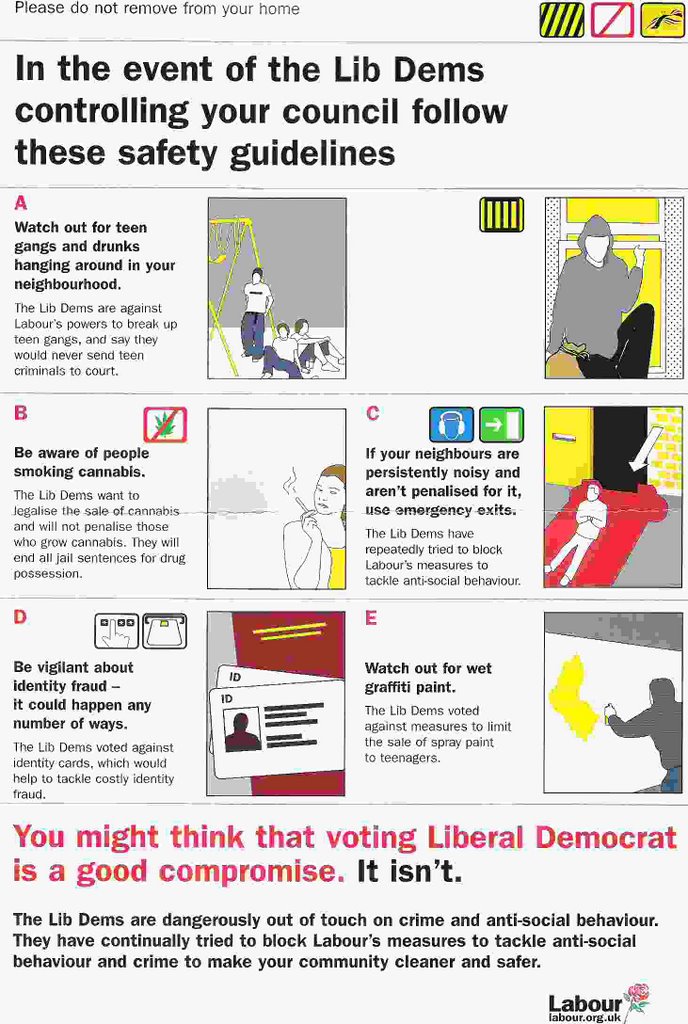