Happy St Andrews Day to one and all.

Speaking of St Andrews Day, let's see what Iain Smith (MSP for North East Fife) has had to say over a period on the matter of declaring St Andrews Day a public holiday.

Then in a debate in 2005 on the introduction of a Members Bill by Dennis Canavan.

I disagree with one fundamental policy intention—it is included in the policy memorandum—of Dennis Canavan's bill. I refer to the intention to create an additional holiday. I have always believed that a St Andrew's day holiday should be created by replacing an existing holiday—my preference would be for the replacement of the spring bank holiday—as we did in the Scottish Parliament. We created a St Andrew's day holiday for our staff by replacing another holiday.

Eagle eyed readers will notice that Mr Smith makes no mention in his motion of 2000 about replacing an existing holiday. In any case, he did not vote in favour of the Bill at Stage One.

Finally, the issue was debated yesterday in Parliament as the Bill reached Stage 3. Here is what Iain Smith had to say on the Bill (which was the same one he made those comments about in 2005 with no amendments tabled)

I support the bill.

Never let it be said Mr Smith is not consistent in his approach.

I imagine he'll be changing his tune on this bill in the coming months as well, no doubt.

Squealer has clearly been sleeping on the job to have missed this howler for so long. Remember when we broke the story on Mr. Rennie's now world famous PMQ on Cluster munitions? It gets better folks. The day after it, Mr. Rennie, who is oh so concerned about cluster bombs, failed to show up to an adjournment debate. The subject? CLUSTER MUNITIONS.

Yes siree! One day after his impassioned anti-cluster bomb PMQ to Tony he fails to show up for a debate on that very topic. We are not kidding. We can't make this up.

This got ol'Squealer wondering....perhaps he reads Fibdems? Perhaps Jeremy Purvis, the MSP of McEwan and Purvis, who have Raytheon as a client, called him to tell him he was off his Christmas card list? Perhaps he was busy signing these three EDM's on Cluster Munitions?

Not a great day's news for the man who will be First Minister:

Stephen: I regret my mistake on mortgage - Press & Journal

But one must take the deputy FM at his word. "I very much regret this error" he says. It's not as if he has been directly involved in dodgy dealings.

However old Porridge does wonder why the best known man in Scotland has not regretted any of his other "errors"? It's not as if they are few and far between. Nor that the Fibs have a reputation for utmost integrity.

"I wouldn't say Nicol's performances are wooden but..."

Who could forget the immortal scene in A Muppet Christmas Carol, where Michael Caine's Ebenezer Scrooge tries to get Kermit the Frog's Bob Cratchett and his fellow employees to come in to work on Christmas Day?
Unfortunately in the Scottish Parliament yesterday a few muppets decided to vote against a Bill to close large stores on Christmas and New Years Days.

While the Bill itself is by no means perfect, it seems rather crass to vote against it at Stage One rather than seek to amend it. 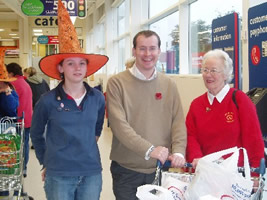 Ban the bombs I helped sell!

This weeks's PMQ's were full of Fibdem screamers! Willie Rennie (Libdem defence spokesperson) did not want to be outdone by his leader, so he decided to get in on the fibbing. He asked the Prime Minister:

Willie Rennie (Dunfermline and West Fife) (LD): After the conflict ended, cluster bombs used in Lebanon by Israel had resulted in 159 casualties, including 23 deaths so far. In Geneva last week, why did the UK not support calls from the UN Secretary-General, the International Committee of the Red Cross and 27 nations for urgent action? In Oslo next year, will the Prime Minister push for a ban on those indiscriminate bombs, or does he agree with the Minister of State, Ministry of Defence, who has responsibility for the armed forces, who strongly advocates the use of such bombs?

Perhaps he should have declared an interest. Faithful readers will be aware we flagged up Wil-lie's past before and his association with Raytheon. He was a top PR man at McEwan Purvis who had the merchants of death as their client. Yes, it is the Raytheon - the weapons manufacturer. Looks like Oor'Willie is not only a political opportunist but the worst kind of hypocrite seeing as Raytheon is a proud manufacturer of, you guessed it, CLUSTER BOMBS.

You can see also see Willie meeting the Acting Director of Raytheon right here in a press release drafted by none other than McEwan Purvis! Of course he went to the factory in his capacity as a new MP. (Note the picture of the F-18 that carries the very same cluster bomb below. Also his ol'workmate's email address at the top. Willie, Willie, Willie, we couldn't even make this stuff up.)

Is there no depth-charge to which two-faced fibbers will sink? 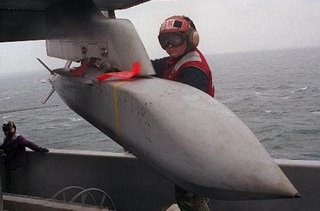 Nicol Given A Smackdown

Nicol Stephen, otherwise known to the Scottish public as 'Nicol Who?' has been given a rap over the knuckles by civil servants for trying to float the idea of a new Forth crossing being given the green light in advance of May's elections.

Turns out there is no chance of it happening, but we all know why Nicol was so keen to try and announce it.

If Nicol was the man to break the news, the Fibs could use it on leaflets and claim it was all thanks to them.

Luckily the civil service are wise to their shenanigans.

Back to the drawing board Nicol.

Fiddler on the Hoof?

So, it seems that erstwhile road safety campaigner Tavish Scott was not happy enough to make a £36,000 profit on a flat which he purchased through the Edinburgh Accommodation Allowance.

He then used the profits which the taxpayer helped him to make to purchase a £380,000 family home, which he now shares with the BBC journalist Kirsten Campbell following his split from his wife.

Guess who is paying the interest on the mortgage?

Still, this is obviously a one-off, it isn't like the Lib Dems have made a habit of using the Scottish Parliament allowances system to line their pockets at the taxpayers expense, is it?

Is there anyone they WON'T go into coalition with?!?!

This is a list of the communities in the Gordon constituency who have lost their local banks due to the closure of rural branches by Clydesdale Bank recently.

This is a motion tabled by Nora Radcliffe, Lib Dem MSP for Gordon, congratualting Clydesdale Bank

*S2M-5084 Nora Radcliffe: Congratulations to Clydesdale Bank—That the Parliament notes the second anniversary of the alliance between Clydesdale Bank and the Post Office Ltd; notes that to date over 2.3 million transactions, totalling over £500 million, have been made by Clydesdale Bank customers through the Post Office, demonstrating the value of this service, especially to people in rural areas where 60% of villages have a post office but only 9% have a bank branch, and commends Clydesdale Bank for allowing all of its customers to access their money at any of the 1,800 post offices in Scotland, the only major Scottish bank providing a service for its customers and helping to support the post office network in this way.

This is a picture of a Job Centre 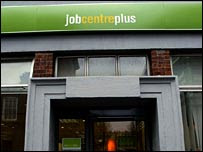