Yesterday in the Scottish Parliament the SNP put forward a motion for debate on the following:

That the Parliament notes the publication by the UK Government of its White Paper on the future of the Trident nuclear missile system on Monday 4 December 2006; recognises the need for a full debate to explore the military, economic and political consequences of Trident renewal and believes that a convincing case can be made, in military, economic and political terms, for the non-replacement of Trident, and calls on the UK Government not to go ahead at this time with the proposal in the White Paper.

This would appear to even cover the Lib Dem "wait til 2014" stance, but at the very least it covers those who are of the opinion that Trident should not be replaced, as found here.

So, in the end, how many Lib Dems voted for the motion?

Zero, that's how many.

Maybe they feel they can justify their stance, we're happy to hear from them if they wish to.

We all know that the fibs have a very strong unanimous position on nuclear weapons.

This little gem from the BBC shows that the Fib MP's in Scotland whole heartedly agree with Ming's position on Trident. Oh wait....8 do not, 1 is not too sure (classic fibber) and 1 wants to keep Trident. Who is the Nuke mad Fibber? Are the eight happy with only keeping half the nukes? Squealer would like to know.

But readers, rest assured of one thing: they are all kinda sorta at the moment might be for or against nukes. 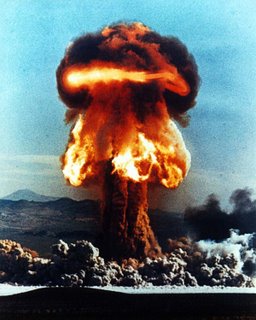 While Squealer tries in vain to limit his comments to Scottish Fibbers, this one from England was just too good to pass up. A softball from the Labour back benches to Jack Straw during biz questions flagged up this howler:

Kitty Ussher (Burnley) (Lab): May we have a debate on the standards expected of local councillors who have been convicted of electoral fraud? My constituents would welcome the opportunity that such a debate would provide to hear the views of all Opposition Front-Bench spokespeople, especially those of the Liberal Democrats given that it is councillors from their party in my constituency, Mozaquir Ali and Manzoor Hussein, who have not yet resigned their seats, despite the basis on which they were elected having been proved in court to be fraudulent.
Mr. Straw: I accept my hon. Friend’s concern. Because we share local newspapers, I am aware of the case. It is shameful for the Liberal Democrat party not to have required the resignation of those people.

How we missed this one for so long I do not know. Vote rigging, charges, jail…and they won't resign their seats? Well at least children were not involved this time.

The Fibdem response is very principled as usual: A spokeswoman for the Liberal Democrats said because the councillors were planning an appeal against their convictions the party was unable to expel them.

According to the Scotland4Peace website 4 Lib Dem MSPs have said they are against Trident renewal.

We find it more intriguing that another 13 Libs have failed to respond to the surveys which were sent out by the organisation.

What have they got to hide?

For Whom The Bridge Tolls

An interesting article in Wednesday's Courier has been sent our way by a Dundee correspondent. We are, as ever, grateful for contributions to the site.

misterinquisitor@hotmail.co.uk is the address to use.

Anyway, we'll take some of the best bits from the article, and reproduce them for you here.

THE LIBERAL Democrats pledged their support for The Courier’s Scrap the Tolls campaign yesterday when they launched a petition to abolish the £1 fee to cross the Forth.

Until yesterday, the party had been sitting on the fence in relation to the Forth Road Bridge toll.

Liberal Democrats sitting on the fence?!? Surely not!

Dunfermline and West Fife MP Willie Rennie said he had been reluctant to jump on the anti-tolls bandwagon because of concerns about congestion.

Really?!? This wouldn't be the same Willie Rennie who centred his Dunfermline & West Fife by-election swindle victory on a petition against an increase in tolls, would it?!?!

I mean, there cannot be any photographic evidence of Willie being against tolling on the Forth Road Bridge, can there? 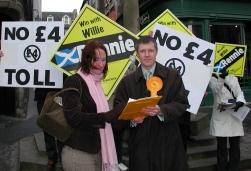 The article then continues at pace to point out that the person in charge of tolling on the Forth, is none other than our favourite road safety campaigner and property market guru, Ravishing Tavish-ing Scott.

So, Willie, when will you be lobbying your own party hierarchy on this one then?

Rather than duping the electorate with a "petition" which always seems to rear its head at election time?

The e-mail address is at the top, or you could leave a comment to let us know.

We'd LOVE to hear from you.

Baby of The House vs Bumbling Hypocrite

In the battle to have the worst oral question to the FCO yesterday, two contenders emerged.

Continuing his bumbling rank hypocrisy, Wil-lie Rennie asked a question, you guessed it, on cluster bombs. Although his question was grouped with fellow fibber John Leech he did get a good follow up in. We give Willie top marks for continuing his inconsistency in the chamber in standing up for this issue. It is clear he works somewhat tirelessly, when he feels like it, in banning the bombs he helped to sell. We also give him bonus points for the irony of using the term ‘dumb’ to describe the wares he helped to hawk.

Jo was keen to pick up where Wil-lie left off. Her question on ‘rubber bullets’ was a real howler.
Even though the Ministers witty response that, ‘she (Swinson) will acknowledge that rubber bullets are a hell of a lot better than ordinary metal ammunition, which tends to kill people or blow their arms off’, did detract a few points she quickly made them up again as she followed the new Fibdem trend of wanting to ban weapons that kill scores of people every year whilst supporting those that have the potential to indiscriminately kill the entire human race. Squealer is often paralysed with fear at the thought of the instant apocalypse that rubber bullets will bring.

Given her past PQ performances she must be given a few marks for keeping the streak alive.

A tie! Squealer must wait for another showdown…he shan’t have to wait long. 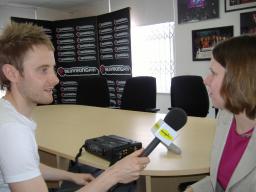 I think the judging is biased. I lie way more often than Willie...lazy bloggers!

Is it all unravelling?

Porridge doth wonder after the Duncan Thorp embarrasment for Ming? I suspect this wasn't in the post-Dunfermline plan.

Nor was Councillor Niall Walker walking out the party after a spat over standing for Holyrood.

Then we have the case of Derek Young being unceremoniously dumped as a candidate in Edinburgh.

And "young unknown" Alex Cole-Hamilton being placed higher by members than the sitting FibDem MSP in their Mid Scotland and Fife list for the Scottish Parliament elections.

Such dumping, demoting and walk outs are usually the hall mark of a party ill at ease with itself.

However the man who will be First Minister does face some parliamentary problems which may be taking his mind of things of things like putting the party at ease with itself. 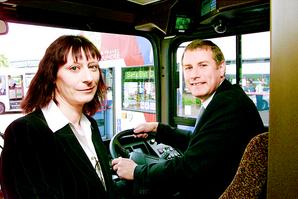 Passengers often wondered where Nichol was taking them

It would appear not all can be happy in the offices of Ming and his partner MSP Iain Smith according to the Herald:

A LibDem press officer yesterday said he would stand for Holyrood as an Independent in the Lothians. Duncan Thorp, a former aide to LibDem MSP Iain Smith, said he understood why voters were disillusioned.

According to this report "until last Thursday" he worked for Mr Smith. Duncan says:

"over the last few years working for the Scottish Liberal Democrats I have become increasingly disillusioned with the entire party political system."

Porridge would suggest that he shouldn't judge all parties on the basis of how the Fibs notoriously operate.

Anyway, more embarrassing for the Fibs is the fact that Duncan is still on Mr Smith's Parliament webpages: 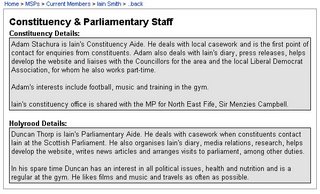 Duncan's website also has some revealing comments on how he feels about the inside track in FibDemmery:

ÂFor many years working in the Scottish Parliament I have seen the reality of what happens behind the scenes in Scottish politics and I can fully understand the disillusionment felt by so many people.

I suppose it would be argued that he wasn't that important but considering the intertwined way Charles Dundas operates within Ming's office, old Porridge wonders just what practices Duncan witnessed to disillusion him within Ming's inner sanctum.

Happily Duncan has allowed us to ask him , so "Ask Duncan" what Fibbery made him disillusioned. 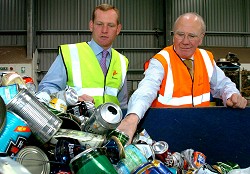 Ming was impressed at how his Scottish manifesto was coming along

MisterInquisitor awoke this morning to find an e-mail from FibDems' Aberdeen mole in his inbox.

Contained within was the link to a story of a Lib Dem Councillor in Aberdeen admitting he accessed pornographic prostitute websites via council computers.

Martin Greig, the councillor for Ashley in Aberdeen, claimed, in his defence, that he was simply conducting "research" as part of his role as chair of the Sex Industry Forum.

One wonders why he had to bother with looking up websites on prostitution when he could have spoken to an expert on the subject.

Of course, regular workers who admit to accessing such sites would be sacked from their job. One wonders what makes Cllr Greig so special that he avoids even as much as a rap on the knuckles?

The whole episode does leave MisterInquisitor, and other FibDems correspondents, wondering what else Cllr Greig would be willing to do in the name of "research"...

It seems "research" is an excuse which the Fibs are fond of using.

Of course, their councillors don't always make a good impression in the eyes of the law...

The Liberals have announced that they have finally made their minds up on Trident.

After telling us earlier, through pronouncements by luminaries such as Euan Robson, that they thought nuclear weapons were evil (but they should still retain them) Ming the Hopeless has now decided that we should retain half the current stockpile. Around 100 warheads.
So, against nuclear power (allegedly) but in favour of nuclear weapons of mass destruction.

That's a principled stance for you.
# posted by MisterInquisitor @ 3:29 PM 3 comments